We’re told it’s called a “Blog Hop Party” and as fun as that sounds, it’s made Chick E and I feel really stupid, because we are not good at following instructions or understanding rules. But, we’re gonna do our best and hopefully do this right…

Many other awesomely hilarious blogs are a part of this and guess what? WE’RE ALL GIVING AWAY STUFF!!! Uh, yeah. That’s what I said. There is a raffle prize to be had on every participating blog that you read in this Blog Hop Party. (Links Below!)

So, I know you’re thinking, “What amazing thing are The Chicks giving away??” So let me tell you. We don’t know yet.

We’re kinda fly by the seat of our pants kinda Chicks, so…enter the raffle here at Rafflecopter and whoever wins, we’re gonna contact you and send you something totally sweet. Trust us, we’re amazing and generous prize givers….we like to call it a “Sur-Prize”…get it??? 😛

But, before you win a new car or a trip to Tahiti, (It will not be either of these things, we’re not that generous..) you have to read our Funny Blog Friday Blog…which we’ve put somewhat of a scary Halloween vibe to, well, it’s about public bathrooms and I don’t know many things in this life that are scarier than public bathrooms.

Public Restrooms. There so many Horrific Things Going on in There….by Chick A

I want to preface this blog by saying that I am a Chick. I cannot really speak to the goings ons of public restrooms of men. Although, I have seen some as a door was shutting and they look very, very scary. There’s huge troughs, urinals that frighten me, and they just seem like they’d be way dirtier. I just imagine pee EVERYWHERE. But, I will not speak on this. So I am hoping some of our male followers will comment below about what’s going on inside Men’s Public Restrooms for my FYI. You know what I mean.

Ugh. The dreaded public bathroom. SO many stressful things going on in there. So many things to think about, worry about, get anxiety about. But, we have to use them. For most people, we have no choice. Whether it be at your place of employment, out at a restaurant, the beach, a concert (the worst), at the Mother Ship, Target….wherever. Let’s discuss some of the panic-causing situations that go on in there and if I leave any out, let us know in the comments below. Maybe there’s some things I haven’t thought of and I’d like to stress out about those as well.

There are all kinds of levels of grossness for public bathrooms. I’m not saying ALL public bathrooms are disgusting, most of the restrooms I’ve used at the Cheesecake Factory Restaurants have been some of the best bathrooms I’ve been in in my life!

1. First off, all public restrooms should play music. Right?? No one wants to hear anything that is going on in anyone else’s stall. ESPECIALLY at work. I work with all these people all day, I don’t want them to even hear me pee, no mind anything else! Sometimes, even with multiple people in there, it’ll get eerily quiet and I don’t even want to move….play some Billy Ocean music, would ya???

They’ve got the RIGHT idea!!

2. I don’t understand how people leave their stall without verifying that they haven’t left anything behind. You know what I mean? It’s like, make sure you don’t need a double flush! I don’t want to see anything  that has come from within you.

3. Why are there gaping doors that could possibly allow others to see in?? Why can’t it be a normal door that closes? Why can’t it be a bathroom like at my house, just like 8 of them all next to each other? I know that most people DON’T want to peak in, but, they COULD, if they wanted to! Seal ’em up! 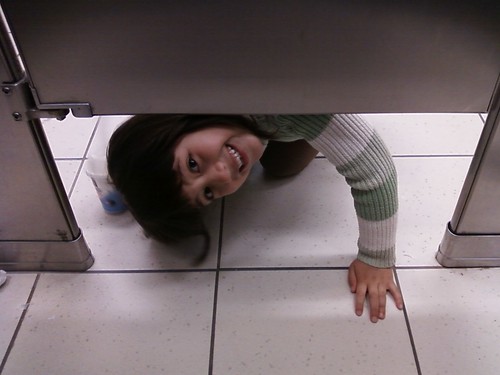 4. How does a public restroom run out of toilet paper?? This should be something that is monitored very closely. Especially in the Ladies Room. And listen, if someone in a stall next to you ever asks you for toilet paper, because their stall has run out, can you give them more that two squares?? Maybe that’s enough for you, but some people want to make like a mitten of TP to wrap around their hand and maybe do a secondary safety check! Two, inevitably one-ply squares of the world’s cheapest toilet paper isn’t going to do the trick….or the treat…. 😉

5. At work, don’t use the bathroom to chat. Get in, get out. No dilly dallying.

6. Clean up after yourself to the best of your ability. How many times have I gone to wash my hands and stepped back only to find that the entire front of my shirt is soaken wet from all the water your got all over the counter. Clean it up!

7. When I was in college, there was always fun stuff on the back of the bathroom doors. Flyers about clubs, stuff about not taking drinks from strange guys, and even a laminated piece of construction paper with a dry erase marker on a string so that you could even write funny notes for the next person. This was really enjoyable and aided in matters when you really needed something to do whilst in there and you didn’t have a magazine to read. Let’s all start that up in public restrooms worldwide! (I guess maybe bathrooms do have that, but it’s just called “graffiti”…)

8. There are inevitably going to be crazy hairs on the seat and you have to basically treat it like a fly in your kitchen….wad up some TP and smash it and scrunch of the TP and flush it, as quick as you can.

10. I could really go on and on, but I know with each number on this list, I lose 18% more readers, so I’ll wrap up. I want to end with the drying process. You’ve gone to the bathroom, dealt with all the crazy stuff in there, you’ve washed your hands, hopefully there was soap (I know a lot of bathrooms at beaches and they never have soap…What’s up wit dat?) and now you need to dry your hands. On this, I have a few things to outline…

A. If it’s one of those old time hand dryers, I don’t even bother. It literally would take an hour, at least to get your hands completely dry from that. Literally. One Hour. It’s so insane. It truly angers me when I go into a bathroom that has those. You might as well just wipe them on your shirt from the beginning because that’s what you’re going to end up doing at the end anyways, so save yourself some time.

B. If it’s an auto-paper towel dispenser, is it just me or do those things have a serious mind of their own?? Sometimes you get a piece as tall as you, sometimes you get a piece that is like the size of a band-aid. You’re always having to wave your hand all around the machine, you’re not sure where the sensor is to make it come out. You try to open it up to get some and it’s locked. Are people stealing rolls of this paper towel??

C. The best dryers are those new jet-fueled ones. You know, the ones where you can’t hear anything for 10 minutes after using because they’re so bloody loud? The ones that amaze you as they blow air so hard onto your hands that you can see all your crazy veins and ligaments and such? (I don’t know if there a ligaments in hands, but let’s just go with it…) But, they dry the crap out of your hands. There’s no shirt-wipin’ after those bad boys. Plus they make awesome hair dryers in a pinch.

D. I HATE when there is just a roll of paper towels out. No contraption to hold them, no machine, no wooden dowel holding them onto a wall…just a roll of paper towel…..you know what I hate it so much? When you try to rip off a piece, the inside of the cardboard tube is always soaking wet from previous users and even now, thinking about that wet cardboard, gives me the heebie jeebies…..so gross. I don’t know why I dislike that as much as I do….it’s not like someone peed on it, but it’s just so incredibly gross.

This grosses me out SO much. So, so super gross.

So, that’s about all I’ll say about public restrooms for now. I’m starting to feel more creeped out than I did tonight while trick-or-treating with my kids and there was a house with one of those hay filled people with the pumpkin heads and in the dark, I always worry that it’s a person that’s gonna jump up and scare me when I get close enough. I image I’d be like all those YouTube videos that show people punching those people out of fear.

Hey…HAPPY HALLOWEEN everyone! Hope you have a super ghoulie day….filled with a good mixture of treats and tricks. 😉

Then, as quickly as you can, go check out all our blogger pals over at their places(below) and read what hilarious things to say and what they have for you to win!!

Jamie of Fits of Wit

Alice of Alice at Wonderland

Sarah of No Cry Babies

Elke of The Pretty Platform

Jack of The Things I see Up Here

Chicks A & E of Too Funny Chicks

Karilin of That Nameless Color

Arthur Browne of Pouring My Art Out

Let Us Know What You Think... Cancel reply

RSS Feed for Too Funny Chicks

What We’ve Been Talking About

Stuff to Look At

JOKES WE THINK ARE FUNNY.

What's worse than a giraffe with a sore throat?

A centipede with athlete's foot!